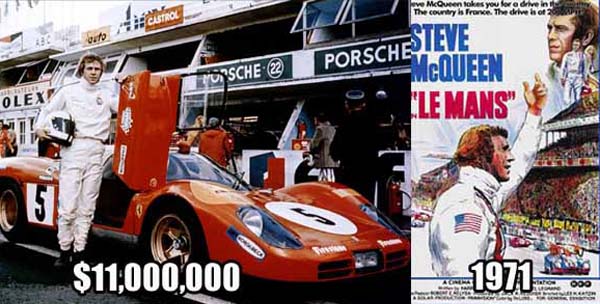 Some say old junk don’t have value, well the idea changes when the ‘junk’ was cast in an old popular movie. Here are some of the cars that were used in vintage movies and their current price tags.

The original Batmobile concept car was developed by Ford and the Lincoln Styling Department. This car’s worth is N1.7 billion ($4.6m) currently.

The Aston Martin was driven by James Bond in Gold finger, the car’s estimated worth is N1.7 billion ($4.6m).

The car was cast in Steve McQueen’s Le Mans and was auctioned for N999 million ($2.7m).

The antique Ferrari managed to pull in almost N2.5 billion ($6.7 m) at an auction.

This is one of six Cobras built by Carroll Shelby. It was then leased to Paramount Pictures to star in the movie Redline 7000.  It pulled in over N2.8 billion ($7.7 m) at an auction.

At an RM Auction in 2008, British TV and radio personality Chris Evans purchased the car for N4 billion ($10.9 m).

For N4.7 billion ($11 m), This is the most expensive American car ever sold at auction for good reason, Apart from the successful race history, being among the first ever cars which used carbon fiber to achieve rigidity and light weight which are now used in formula 1 cars, it was associated with one of the few people in history with the Midas touch: Steve McQueen.

Nigeria In Trouble As Production Of Gasoline Cars Ends In 2025

Spark Plug: Main Parts,Types And How IT Works.