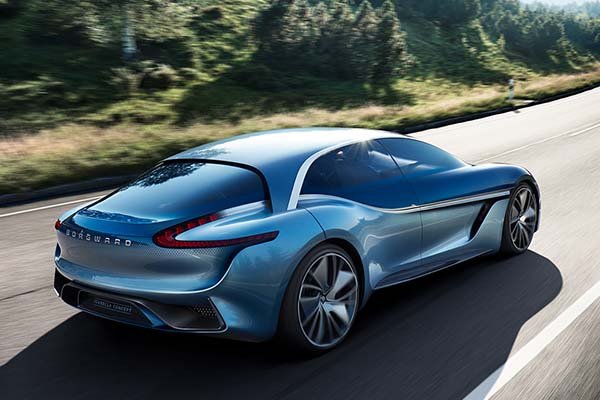 If you have no reason to love the 2017 Borgward Isabella, I guess it’s worth loving for those doors only.

The car is an electric drive, fully digital interconnectivity and a revolutionary interior and operating concept – these are the visionary features with which the Borgward ISABELLA Concept celebrates its world premiere at the IAA 2017. The four-door coupe stands out with its design, demonstrating the future direction of the entire Borgward company. The goal: stylistic synergies between beauty and technology.

Borgward is an automobile manufacturer that was founded by Carl F. W. Borgward (November 10, 1890 – July 28, 1963). The original company, based in Bremen in Germany, ceased operations in 1961. The Borgward group produced four brands of cars: Borgward, Hansa, Goliath and Lloyd.

The marque was revived by Carl Borgward‘s grandson, Christian Borgward, with his partner Karlheinz L. Knöss, and assistance from Chinese investment in 2008. It unveiled the company’s first new car in over 50 years, the BX7 at the 2015 International Motor Show. (Wikipedia).

See Related Post The New 2018 Toyota Prado Is Here. What Do You Think? (Photos)

In this car, Borgward Group AG has presented the Borgward ePROPÚLSION electric drive system platform. The battery, which was jointly developed by Borgward and its strategic partner LG Electronics, makes a big impression with its high energy density. In the next development steps, the drive platform’s electric range is due to be increased to as much as 500 kilometers. The charging cycle to 80 percent capacity takes only 30 minutes at a fast-charging station. The Isabella can be recharged inductively as well.

The eAWD electronic control and electric motors at both the front and the rear axle turn the Isabella into an all-wheel-drive vehicle with a fully variable torque distribution system. The two permanent magnet synchronous motors with integrated converters have a combined output of 300 hp, deliver a maximum torque of 332 lb-ft. As a result, the vehicle accelerates from 0 to 100 km/h in 4.5 seconds, and its thunderous forward thrust does not end until 250 km/h is reached.

Price remains unknown till it goes into production

See Related Post The New 2018 Toyota Prado Is Here. What Do You Think? (Photos)