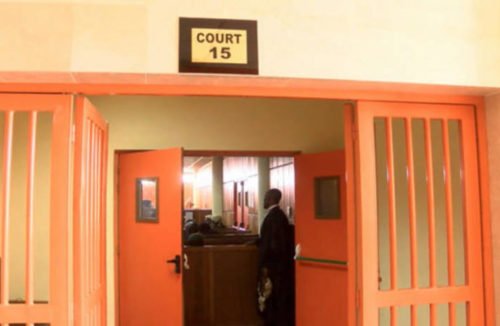 A 25-year-old driver, Okpono Friday, was on Tuesday arraigned before an Apapa Magistrate’s Court for allegedly causing damage to a van belonging to one Rear Admiral Eyo of the Nigerian Navy.

Friday is facing a two-count charge of reckless driving and driving without driver’s license.

The prosecutor, Sergeant Marvellous Obongha, told the court that the defendant committed the offences on July 5, 2019 at about 8:15am along Park Lane Road, Apapa.

“The defendant being the driver in charge of a Hilux pickup van unregistered drove same vehicle on the public highway in a reckless manner and caused damage to a Hilux pickup van valued at N1.5 million property of one Rear Admiral Eyo (NN),” Obongha said.

The prosecutor also said that the defendant drove the same vehicle without a driver’s license.

The defendant pleaded not guilty to the charges.

Magistrate K.A Ariyo granted him bail in the sum of N350,000 with two sureties each in like sum.

The sureties are required to furnish the court with six months’ bank statements and proof of tax payment.

They must be blood relatives to the defendant and gainfully employed.

She adjourned the matter till September 5, 2019 for mention.

A lot of people doesn’t know driving recklessly or causing causing an accident without a drivers license is a serious crime. Make sure you have your license before hitting the road.

Customs Generates N203bn In The First Half Of 2019, Intercepts 29 Containers At Apapa Port