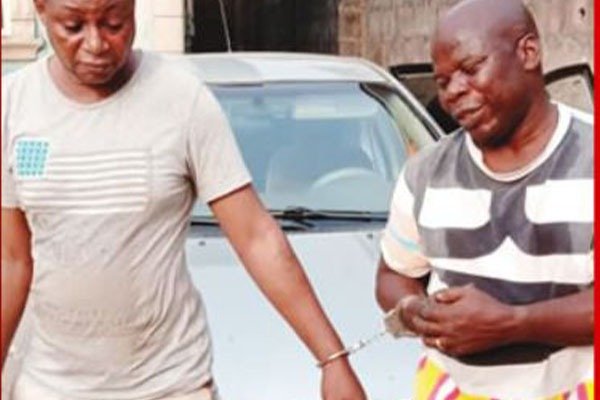 Two suspected car thieves have been paraded for allegedly stealing a Toyota Corolla at Shagari Estate in the Ipaja, Lagos State.

The Nigerian police arrested the two suspects, Bamidele Adebayo and Hakeem Taofik, connecting to the car theft on Sunday.

It was learnt that the suspects stole the car around 1 pm from a church’s car park (name withheld), during service.

According to a church member, the robbers pretended to be members of the church, sat and listened to the sermon.

After the church service, the owner of the car wanted to go home, his car was nowhere to be found. After a thorough search, the church pastor called the police for investigation.

According to the Police Public Relations Officer, DSP Bala Elkana, “The car was stolen around 1 pm”. “This occurred on Sunday while the church service was still ongoing”.

The PPRO disclosed that the car was recovered around 4 pm on the same day. This led to the arrest of two suspects in connection with the theft.

Elkana said, “A Toyota Corolla saloon car was removed from a church’s car park at the Shagari Estate, Lagos around 1 pm on Sunday. The same car was recovered at Ijagba village in Sango Ota after the Obasanjo Farms”.

“The car was recovered around 4 pm by a team of policemen, who tracked it to the location. Two suspects have also been arrested and the vehicle is at the station.”

7 Types Of Damages That Potholes Can Cause To Your Car

12 Ways To Make Your Car Last Longer In Nigeria