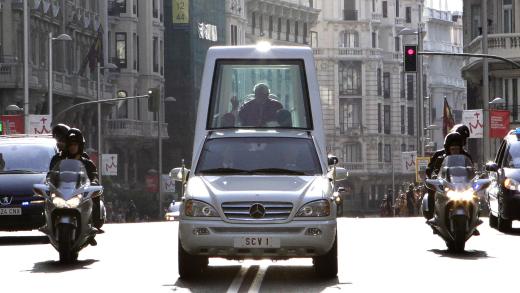 Popes weren’t always carried in fancy popemobiles and papal transport wasn’t always referred to as a popemobile. The unofficial term began to be used in the 1970s after the creation of a series of white all-terrain vehicles with bubble tops for use by pontiffs.

Here are some facts about the Popemobile you probably never knew

1)Before the use of the Popemobile,Popes used to move around on the shoulders of 12 loyal footmen on portable throne chairs calledsedia gestatoria to greet people during special occasions and processions.

2)Since 1929,the chosen cars were black and normally from the brand Mercedes Benz, changing the model over the years.

3)From 1980,it started to be painted in white displaying the arms of the Vatican, and includes a plastic transparent cupola with air conditioning and illumination to allow the Pope to stand or sit while traveling and to see and be seen by everyone.

4)While Mercedes has made 12 different ones over the years, SEAT, GMC, Toyota, Fiat, Isuzu, Kia, Hyundai, Land Rover and Jeep have all made models as well.

7)There is no official name for the Popemobile.

9)Many Popemobiles remain in the country they are used in,from a small Seat Panda in Spain to busses (Mexico City), a Ferrari Mondial (Maranello, Italy, a truck Leyland (England) and a Ford (Ireland), and even a military truck FSC Star when the Polish Pope visited his home land.

10)Despite weighing five tons and travels at about 10mph, it can reach speeds of 160mph in order to provide a lightning fast escape.

11)The car comes with a stereo to help pass the time of day.

12)The vehicles always presented the license plate “SCV 1” – Stato della Città del Vaticano (State of the City of the Vatican) and the number 1 symbolizing that it is for the Sovereign Pontiff.

Do you think you know more? Please add in the comments box below…